Summary
In Paper 1, we present initial observations of the interstellar body 2I/(2019 Q4) Borisov taken to determine its nature prior to the perihelion in 2019 December. Images from the Nordic Optical Telescope show a prominent, morphologically stable dust coma and tail. The dust cross-section within 15,000 km of the nucleus averages 130 km^2 (assuming geometric albedo 0.1) and increases by about 1 percent per day. If sustained, this rate indicates that the comet has been active for about 100 days prior to the observations. Cometary activity thus became strong in 2019 June, at which time C/Borisov was at 4.5 AU from the Sun, a typical distance for the onset of water ice sublimation in comets. The dust optical colors, B-V = 0.80+/-0.05, V-R = 0.47+/-0.03 and R-I = 0.49+/-0.05 are identical to those of a sample of (solar system) long-period comets. The colors are similar to those of 1I/(2017 U1) 'Oumuamua, indicating a lack of the ultrared matter that is common in the Kuiper belt, on both interstellar objects. The effective size of the dust particles is estimated as 100 micron, based on the length of the dust tail and the 100 day lifetime. With this size, the ejected dust mass is of order 1.3x10^7 kg and the current dust mass loss rate 2 kg/s.

In Paper 2, we use new observations from Hubble Space Telescope to set an upper limit to the nucleus radius of 500 meters. We use an independent method to set a lower limit of 200 meters. The nucleus is very small.

By comparing with the flux of meteors, we find that the interstellar size distribution is a power law with index < 4. We also calculate that interstellar bodies larger than about 100 meters strike Earth once every 100 Myr to 200 Myr, and that Earth has been impacted 25 to 50 times in its lifetime. 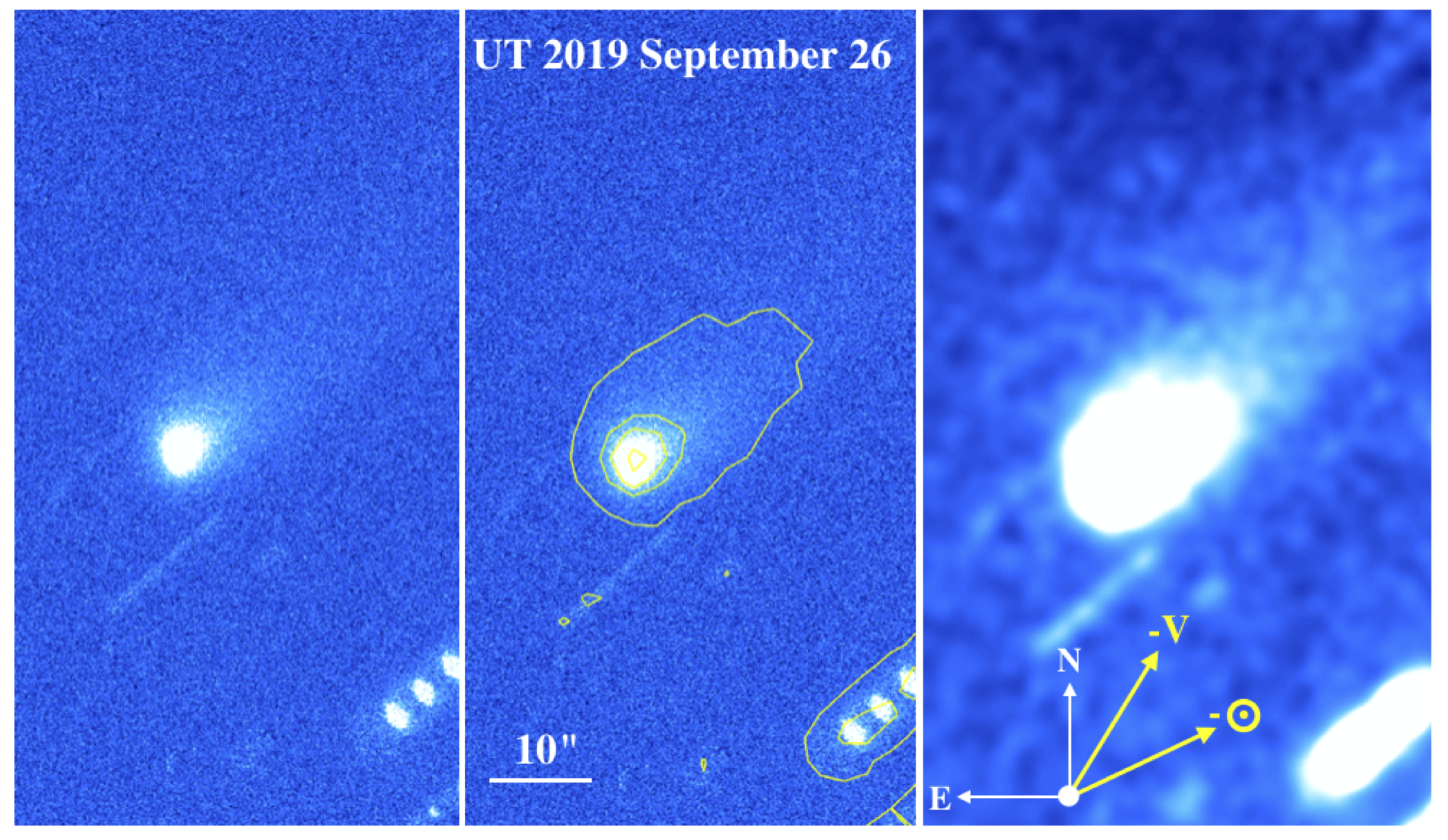 Caption: The first two interstellar objects compared. (Left) 1I/2017 U1 ('Oumuamua) from the Nordic Optical Telescope in Las Palma on UT 2017 October 26. (Right) 2I/2019 Q4 also from the Nordic Optical Telescope on UT 2019 September 26. 'Oumuamua is a point source, like an asteroid. Borisov is clearly an active comet. A major question is "why are these two so different?"