Summary
Asteroid (596) Scheila, discovered photographically in 1906 by August Kopff, unexpectedly ejected a cloud of dust in late 2010 (first noticed by Steve Larson at University of Arizona). This dual character ('asteroid' by its orbit but 'comet' by its appearance) qualifies Scheila as the 7th Main Belt Comet (MBC). The MBCs are thought, in some cases (like 133P) to be activated by the sublimation of near-surface water ice while others, notably P/2010 A2, are dust clouds ejected by recent impact.

With a diameter of 113 km, Scheila is vastly larger than the other MBCs. We examined this large object using the Hubble Space Telescope on two dates about a month after the start of the outburst. 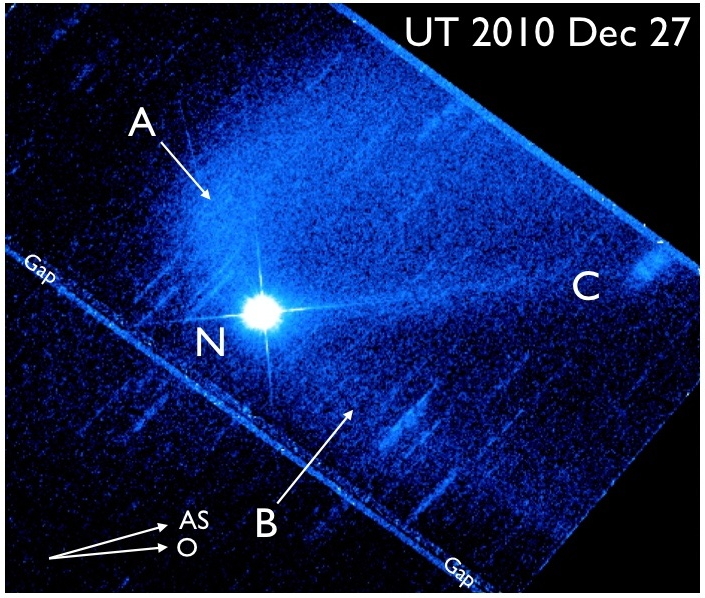 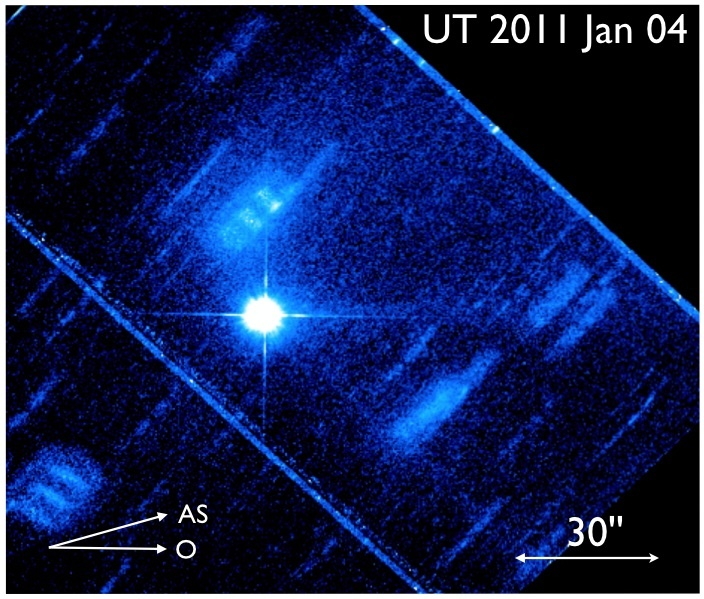 Caption: (596) Scheila imaged with the Hubble Space Telescope WFC3 camera on (left) UT 2010 Dec 27 and (right) UT 2011 Jan 04. The asteroid is marked "N". The crosses emanating from N are diffraction spike artifacts of the Space Telescope. Diffuse regions "A" and "B" show micron-sized dust grains that have been ejected from Scheila and are being swept back by radiation pressure from the Sun. The direction opposite to the Sun is marked "AS" ("antisolar"). The projected orbit is marked "O". "C" marks a thin tail that may be caused by substantially larger particles. It is slightly confused by overlap with one of the diffraction spikes from Scheila.

Click on the panels to see larger versions of the images. Figure from our paper, also available here as a PDF.

The morphology and the fading (about 30% between the above two images) show that Scheila's coma is impulsive, and consistent with production by the impact of an unseen 35 meter diameter asteroid into Scheila in late November/early December 2010.

Thus, Scheila emerges as the second known example of a near real-time impact in the asteroid belt. A process that was previously assumed to be so rare as to be unobservable has moved firmly into the realm of our perception.

The good people of NASA Goddard Space Flight Center have even made a Quicktime movie to illustrate what we think happened. Very cool!