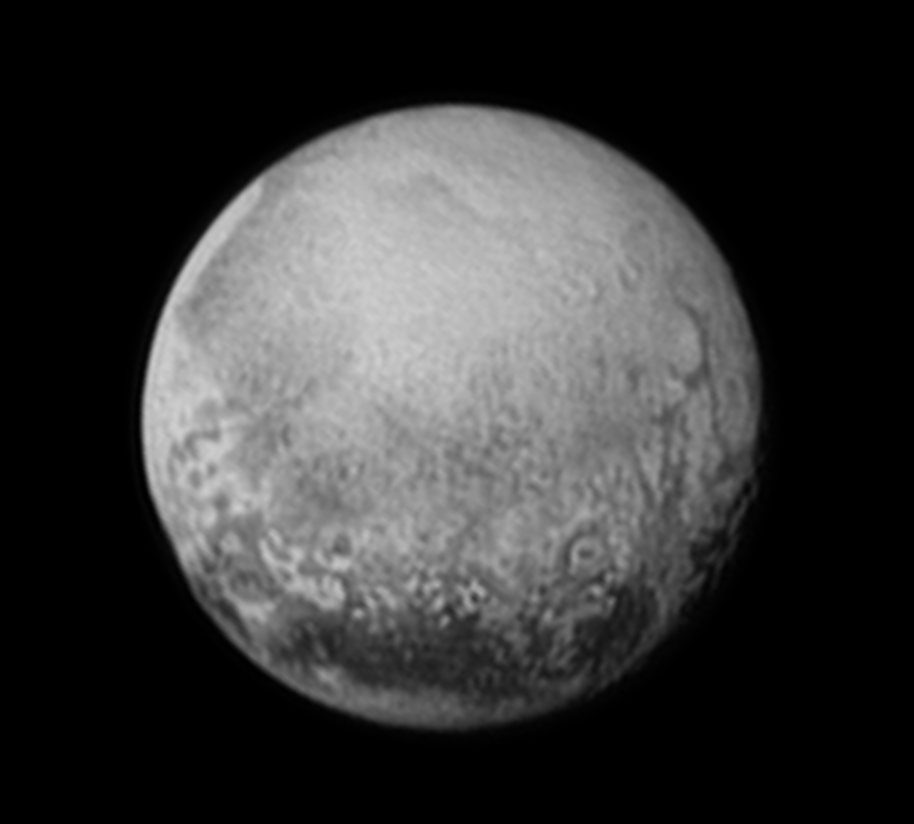 The discovery of the numerous bodies in the Kuiper Belt raises the question of the nature and significance of Pluto. This was evident immediately upon the discovery of 1992 QB1 and every KBO discovered since then has emphasized the same point: Pluto looks less and less special with every new KBO we find. Most recently, several large KBOs, including one as large as Pluto itself, have shown clearly that Pluto is not unique. As described on the Plutino Page, the orbit of Pluto is not different from the orbits of a large number of Plutinos already discovered. If you doubt this, take a look at this plan of the solar system and see if Pluto stands out from the other trans-Neptunian bodies (hint: it doesn't). Other distingushing characteristics such as the size and Pluto's satellite have slipped away with the flood of new discoveries. Pluto's size conveys several secondary benefits, notably the ability to retain a thin atmosphere from which surface frosts are deposited. For this reason, Pluto's albedo is very high (about 60% compared to the 4% assumed to prevail elsewhere in the Kuiper belt). But this difference really is secondary and, in any case, other large KBOs have high albedos that are best explained by the deposition of surface frosts .

So, until recently, one had two choices. One could either regard Pluto as the smallest, most peculiar planet moving on the most eccentric and most inclined orbit of any of the planets or one could accept that Pluto is the largest known, but otherwise completely typical, Kuiper Belt Object. From the point of view of trying to understand the origin and significance of Pluto it has always made sense to take the second option. Pluto's eccentricity and inclination were pumped up along with the eccentricities and inclinations of the ~few x 1000 other Plutinos (diameters > 100 km), probably driven by the radial migration of Neptune. The processes that shaped the orbits of the KBOs are the same ones that gave Pluto its prominent dynamical characteristics.

In August 2006, the International Astronomical Union, a group concerned with naming and pronouncing on astronomical matters, decided to call Pluto a Dwarf Planet. This label, popular with children and fans of the Snow White story, has no value over Large Kuiper Belt Object.

My UCLA colleague Jean-Luc Margot has proposed a simple discriminant between objects ("planets") big enough to clear their orbital vicinities and objects too small to do so. By his discriminant, Pluto fails to make the cut by almost two orders of magnitude in mass. The paper pdf is here.

Some people see this as a demotion for Pluto. I think that it can reasonably be portrayed as a promotion. Our perception of Pluto has been transformed from a singularly freakish and unexplained anomaly of the outer solar system to the leader of a rich and interesting family of trans-Neptunian bodies whose study will tell us a great deal about the origin of the solar system.

So, we have discovered -1 planets and +1 Kuiper Belt. It seems like a fair trade to me. (See also Dan Green's page).

An interview with Pluto.

A postcard to Pluto.

A Czech translation of this site by Kate Bondareva.

A Ukrainian translation of this site by Vlad Brown.