A surprising observational result is that many of the Kuiper Belt Objects are in or near a mean motion resonance with Neptune. A mean motion resonace (MMR) means that the ratio of the orbit period of the object to the orbit period of Neptune is the ratio of (usually small) integers. For example, Pluto is in the 3:2 MMR, meaning that it completes 2 orbits around the sun in the time it takes Neptune to complete 3 orbits. The MMRs are "resonant" in the sense that the same spatial arrangement of the KBO and the planet is repeatedly attained, allowing gravitational perturbations to become additive and the resulting dynamical effects to be strong. 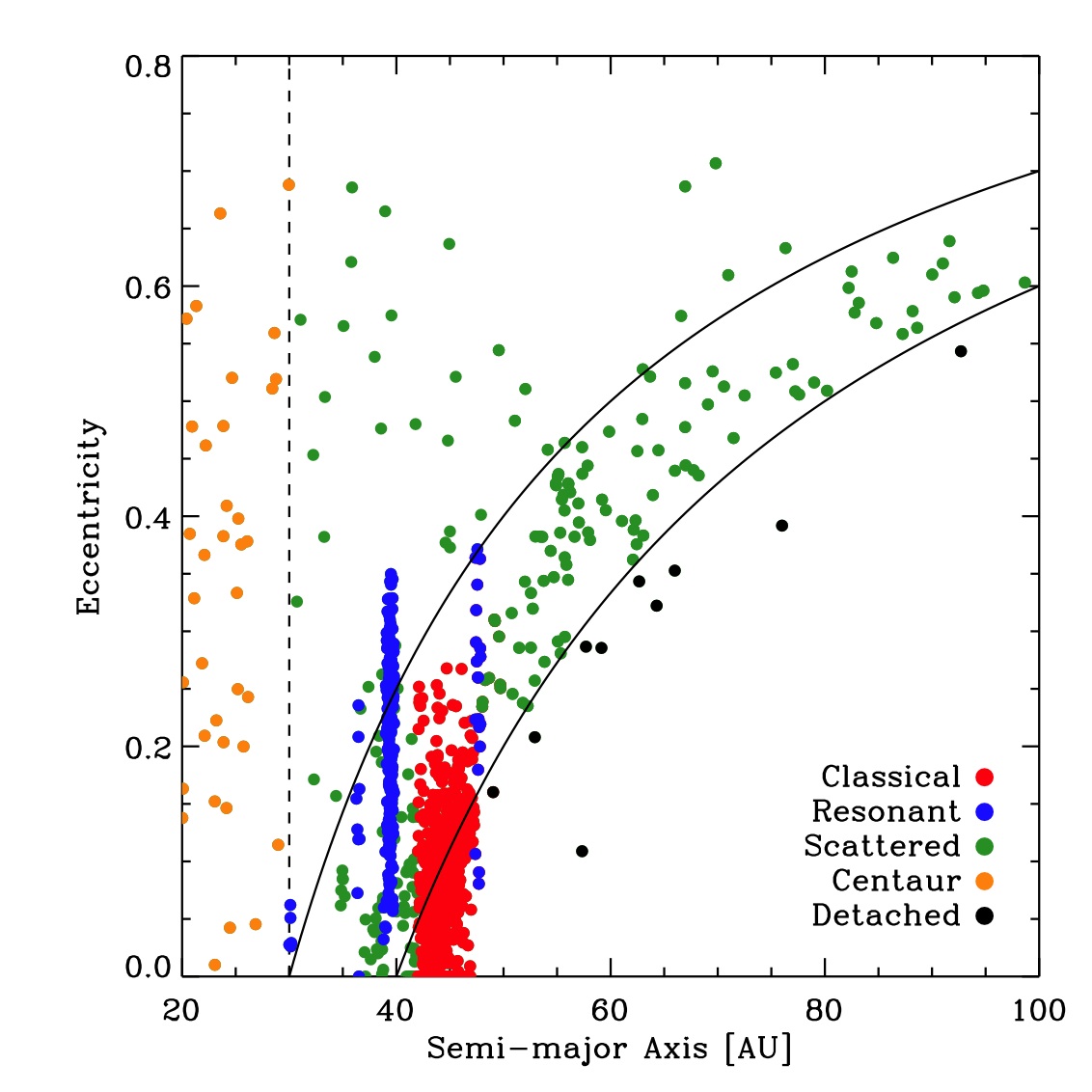 FIGURE 1: Diagram showing the distribution of objects in the outer Solar system in the semimajor axis vs. eccentricity plane. The orbit of Neptune is marked by a vertical dotted line. Objects in blue are resonant with Neptune. The most densely populated cluster of blues shows the 3:2 resonant objects which include Pluto. [click on the Figure to see a much bigger version]

The resonances act to stabilize the orbits of the KBOs in them. This is because resonantly orbiting objects can be "phase protected" against ever making close approaches to Neptune. Resonant objects in elliptical orbits can approach the orbit of Neptune without ever coming close to the planet itself, because their perihelia (smallest distance from the sun) preferentially avoid Neptune. In fact, it is well known that Pluto's orbit crosses inside that of Neptune, but close encounters are always avoided. This property is also shared by a number of the known Plutinos (e.g. 1993 SB, 1994 TB, 1995 QY9), further enhancing the dynamical similarity with Pluto. Objects nearby but not in the resonance are scattered away because they do approach Neptune closely.

How did the resonances, especially 3:2, come to be so full? An exciting idea has been explored by Renu Malhotra. Building on earlier work by Julio Fernandez, she supposes that, as a result of angular momentum exchange with planetesimals in the accretional stage of the solar system, the planets underwent radial migration with respect to the sun. Uranus and Neptune, in particular, ejected a great many comets towards the Oort Cloud, and as a result the sizes of their orbits changed. As Neptune moved outwards, its mean motion resonances were pushed through the surrounding planetesimal disk. They swept up objects in much the same way that a snow plough sweeps up snow. Malhotra has examined this process numerically, and finds that objects can indeed be trapped in resonances as Neptune moves, and that their eccentricities and inclinations are pumped during the process.