The orbits of the MBCs are plotted in the figure below (click on the figure to see a much larger view). As is self-evident, the MBC orbits resemble those of numerous nearby asteroids. Three are located near 3.2 AU and two of these have eccentricities consistent with membership in the Themis family - an old, large (300+ km diameter) shattered asteroid. These two MBCs are dynamically stable on billion year timescales, consistent with their identities as otherwise unremarkable outer-belt asteroids. The fourth, near 2.7 AU, appears dynamically different, and integrations show that the orbit is unstable to planetary perturbations on timescales of a few 10s of Myr. 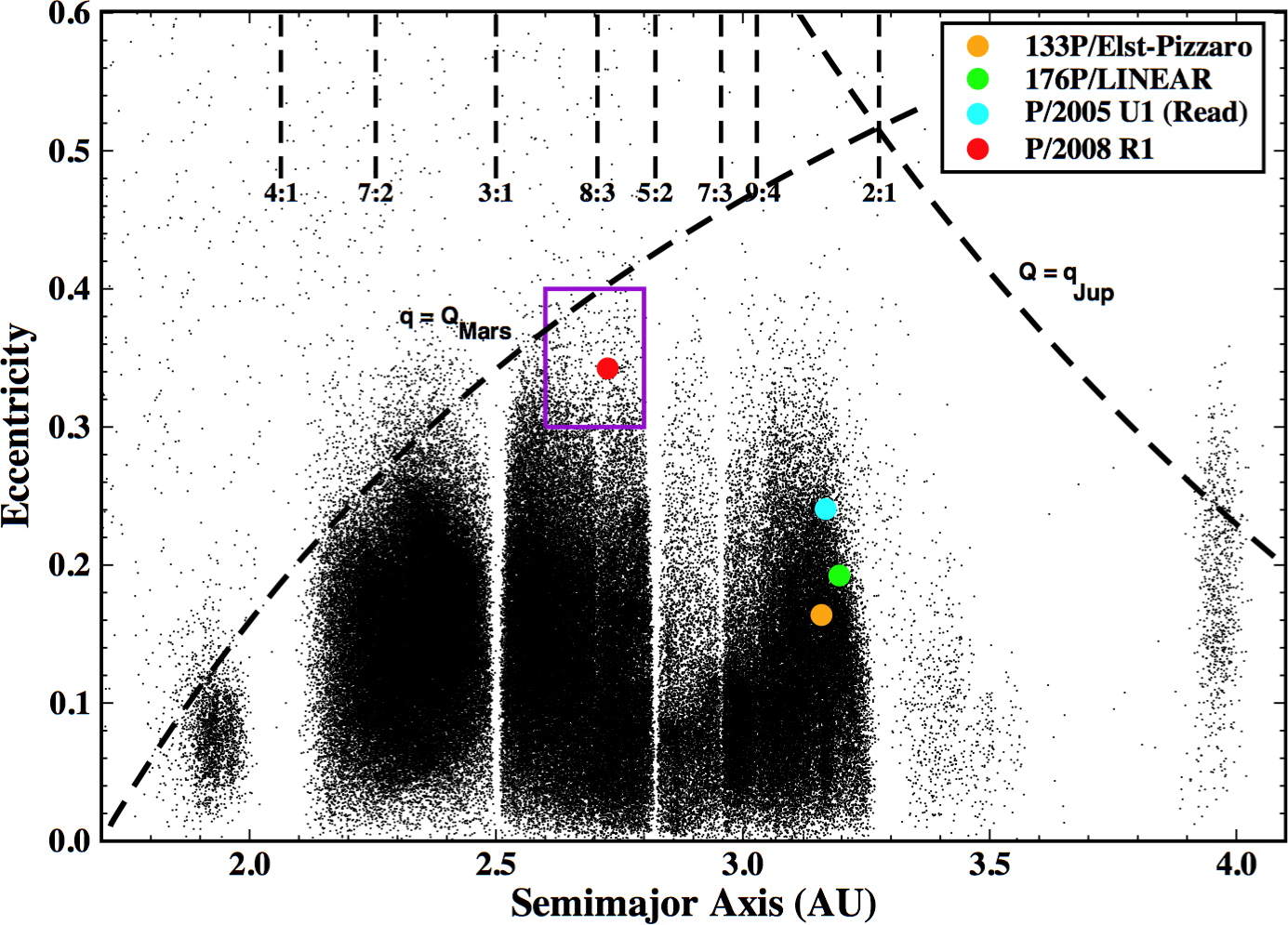 Caption: This plot shows the distributions of the orbits of classical asteroids (tiny black dots) in the semimajor axis vs. orbital eccentricity plane. The orbits of the first four MBCs are over-plotted with colored circles. Dashed lines in the figure show the locus of orbits that have perihelion distance equal to the aphelion of Mars (the curve sloping from lower left to upper right) and orbits that have aphelion distance equal to the perihelion of Jupiter. Objects that fall above these curves are either Mars-crossers, or Jupiter-crossers, or both. The consequence of that is that such objects are dynamically short-lived because one or other planet will knock them out. Figure from Jewitt, Yang and Haghighipour (2009).

Near surface ice is more stable against sublimation in the outer belt than in the inner belt, where temperatures are higher. Three of the first four MBCs lie in the outer belt, perhaps for this reason.

Exposed ice must sublimate with enough ferocity to eject dust in order for these objects to be detectable. This favors the opposite trend - near Sun MBCs will sublimate more rapidly, producing more obvious comae. MBCs at 4 AU, however, will be puny sublimators and harder to detect.

Ice may have been emplaced in these objects with different efficiencies at different distances. For example, a strong primordial temperature gradient across the belt would mean that none of the inner objects might retain ice (it would all have melted and reacted with silicates to make hydrated minerals if ice were present at all).

Dynamical stability also impacts the distribution. 133P and 176P appear stable for Gyr times but P/2008 R1 is unstable and P/2005 U1 probably is unstable too. The unstable objects must have reached their current locations recently, after storage since the origin in some other, more stable place. Presumably this place was further from the Sun, in order to permit the survival of near surface ice. Perhaps P/2008 R1 recently escaped from an orbit closer to one like 133P.

If some MBCs are fragments of a collsionally smashed parent (in the Themis family or the smaller, younger Beagle family that lies within the Themis family), then the distribution of orbits would reflect the orbit of the precursor.


What is the *true* distribution of orbits of the MBCs? The four we know are too few to properly map their orbits and, worse, they were discovered by poorly characterized surveys that are not free from bias (e.g. 176P has an orbit very similar to that of 133P but we found it in a survey that was specifically designed to find objects with orbits like that of 133P. This is the "looking for the keys underneath the street lamp" phenomenon, because the only place you can see your keys in the dark is under the light of the street lamp. Relatively unbiased surveys will soon be possible in which MBCs are detected without prior assumptions about their orbital elements. They'll still be sensitivity-limited, though, meaning that faint ones and intermittently active ones will be preferentially missed.